One of the best things about living in a picturesque and sleepy town like Charlottesville is that you can leave it for the winter. All through August, September, October and November, each and every Darden student dreams of the “holy” December break. I say holy because of Christmas that falls smack in the middle of it and of course that it seems like the “Holy Grail” – ever unattainable.

Being a south Indian with tons of family in the US on the West coast, the decision was fairly easy. I was venturing across the American expanse to visit my extended family and some giants of software innovation at San Francisco, San Jose, Palo Alto, Seattle, and Redmond. After much drama of almost missing my flight to San Francisco, I made it just in the nick of time. It was a great feeling to be at an airport and going somewhere… anywhere for a change! I could almost not contain my glee.

Finally the San Francisco lights twinkled beneath the aircraft! The best part about having family in every city that you plan to visit is that they pamper you to no end. Picking you up and dropping you to airports. Cooking delicious home cooked food. Showering you with much needed family love after the grueling first quarter at Darden. While the mornings were packed with visiting the likes of Google, Microsoft, Yahoo, Amazon, LinkedIn, Netflix, EA Sports (All my guy friends burnt with envy about this!), Group On, EBay, Thumbtack, Tableau, Expedia and Jawbone, the evenings were spent with uncles and aunts, cousins, grandparents, nieces and nephews, all of them moving around their schedules for you to make your first visit to a new city in the US memorable! I met friends I hadn’t seen in years since college but it feel like picking off from where we last left. I finally retired to Boston for the remainder of the winter and spent Christmas with family at Yale, New haven. After all the touristy activities like the golden gate, the space needle, the first Starbucks store, and ticking off many many checklists in each city, I realized that in six months of being in the US, I had visited both the east and the west coast, Chicago and Detroit in the mid-west, Boston and Yale in the northeast… phew… Not bad for a start at all, I thought.

In the New Year, with hundreds of cities and countries left to explore on my bucket list, thousands of new experiences to be had, a million new things to be discovered, the only thing I could think about on my train ride back to Charlottesville, was my empty apartment and a gazillion cases that were waiting to be cracked for interviews and classes.

It was at this very moment when the train crossed New York that I realized – The person who needs a vacation the most is someone who just got back from one! 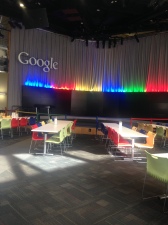