I still remember the first time I saw the mind blowing roller coaster rides on Discovery travel and Living on Indian television. It was late one evening on a show called, “The most trilling roller coaster rides in the world”. Seven out of the top ten were in the US. It was right then that I decided that this was going onto my bucket list of things to do!

And so, one year since I landed in the United States, it was this summer when I finally decided to make it happen. My partner in crime and I decided that it was high time we went on a mini road trip and treated ourselves to some grand rides! So we embarked on a 2000 mile journey. Washington DC, Pittsburgh, Cleveland – rock and roll hall of fame, Detroit, Cedar point, Charlottesville and then finally back to Boston.

Cedar point is the case in point here. Perched on the tip of an island, the dramatic entry to which is only via a long bridge, the feeling is exhilarating you as you approach it.

There is a lot of strategic planning that goes into visiting an amusement park of this scale in the US. First, you don’t want it to be on a weekend. Given that it was the summer break it didn’t really matter. Second you want to leave it to the rain gods to make sure that crowds get dissuaded from cedar point. And so luckily there were showers. Heavy enough to discourage the majority of the crowds but light enough for those of us risk loving ones to still venture to the park in hope that the major rides won’t be shut down. Thirdly, you want to be an early bird to the park. Given how early we started, I was still surprised at how many cars were there already. You also want to make sure you are empty stomach for the whole experience, of course only sipping on fluids and electrolytes. Clearly the rides don’t make for a stomach friendly experience.

Once you enter the park, you feel butterflies in your stomach. The sheer construct of the rides over takes your bravado. And so you gingerly open the map. Being strategic about heading straight to the end of the park in the hope that the lines would be the shortest.

As I stood in line for the first ride – “the maverick”; worms, centipedes, and millipedes now joined the butterflies in my stomach. That’s another thing – the names sound so intimidating – The mantis, the gatekeeper, the dragster, the raptor, the mean streak, the blue streak, the magnum XL-200, the millennium force, the cork screw, the sling shot. The “The” makes it more overpowering in your mind.

The moments up to the ride is what builds up the adrenaline, the rush and the excitement. The ride itself is exhilarating, adding the element of “really living life to the fullest in that moment”. And with that I had the time of my life. On each ride!

But then that’s life! There are rides you will be scared of. There are rides you will deem not safe. There are rides you feel you aren’t made for. But the real fun is in standing in line despite all those feelings, letting the adrenaline engulf you, over-coming your fears, insecurities, perceptions of yourself, and strapping on the safety belt, taking in each emotion of excitement, nervousness, apprehension, joy, wonder, doubt, getting onto the ride, living in the moment and finally surviving the ride. 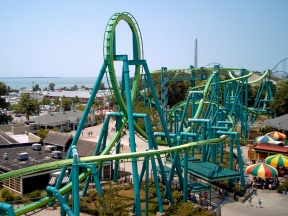 On the trip back closer home, I thought about how “Darden recruiting” is in essence like a roller coaster. The curves, the bends, the uncertainties, the fears, the doubts, the joy, the mundane moments of waiting, and finally the sense of accomplishment and calm. Of course all of these in some random order and varying degrees of magnitude. The only thing you can do is just strap on and get onto the ride of your lifetime.